I had been looking for an Arduino-based project for a while as an excuse to buy one. My son played laser tag at a local field and I figured “Hey, I can build that”. A few Arduino Nano’s later and an order from Adafruit I was prototyping.

Diagram of the layout: 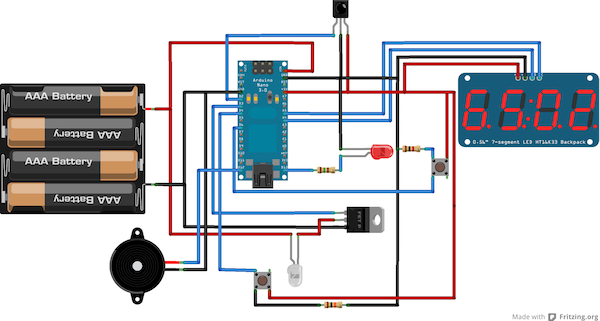 Arduino sketch is available at github.

For a case I chose a Buzz Bee Cougar foam dart gun. I chose this as not only was it only $10 but it had plenty of room in the center body for equipment I had to stuff in it. It’s actually a pretty decent foam dart gun on it’s own, comfortable and the cocking mechanism is in the stock which I was able to retain for reloading purposes.

The barrel and lens were a lucky buy in a set of $5 binoculars that perfectly fit in the barrel location of the Cougar. The lens isn’t perfect for the focal length in terms of range, but it’s more than adequate for now and testing.

Now to build a second one.